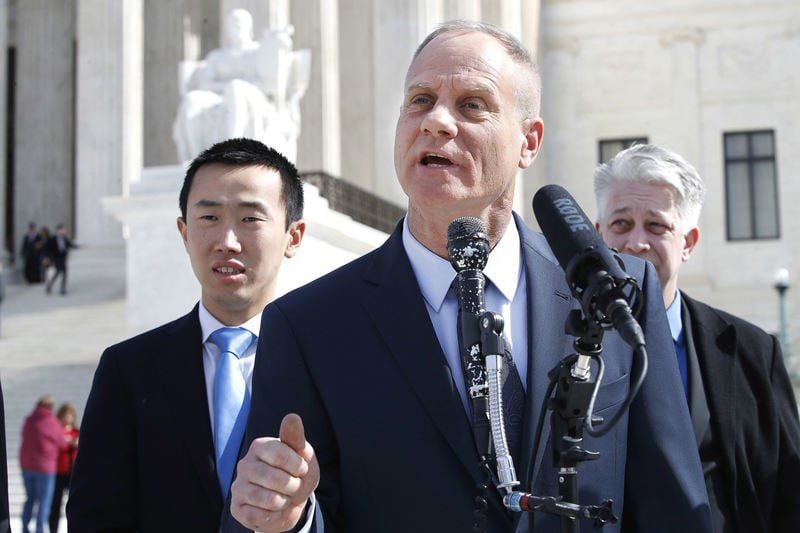 WASHINGTON (AP) — They were all dressed in basic black robes, but the Supreme Court’s nine justices had a serious discussion about fashion Wednesday as they heard arguments over a Minnesota law that bars voters from wearing political clothing to the polls.

Almost every one of the justices had some hypothetical article of clothing to talk about as they explored the issue of free speech at polling places and whether various clothing items could be prohibited.

Justice Ruth Bader Ginsburg asked about a #MeToo pin. Justice Elena Kagan wanted to know about clothing that says “Resist” or “Make America Great Again.” And Justice Samuel Alito’s laundry list of items included a National Rifle Association T-shirt, shirts with the text of the First and Second Amendments and a shirt with a rainbow flag.

Amid the arguments over apparel, several justices suggested support for at least some polling place restrictions. Chief Justice John Roberts told the attorney arguing against Minnesota’s law that he wondered if, after months of a “maybe bitter, sharp, political campaign,” if “maybe, just before you cast your vote, you should be able to have a time for some quiet reflection or to do that important civic obligation in peace and quiet without being bombarded by another campaign display.”

Most states have laws restricting what voters can wear to the polls, but Minnesota’s law is one of the broadest. It bars voters from casting a ballot wearing clothing with the name of a candidate or political party or related to an issue on the ballot. But Minnesota voters also can’t wear clothing promoting a group with recognizable political views. That means no tea party T-shirts, AFL-CIO hats or MoveOn.org buttons.

Both sides agree that there are about 10 states with laws like Minnesota’s, though they have disagreed on which ones. Other states have narrower laws just barring voters from wearing campaign clothing.

During an hour of arguments Wednesday, some justices questioned Minnesota’s broader ban. Justice Neil Gorsuch suggested Minnesota’s law is “a bit of an outlier” in its sweep. And Alito said it invites “arbitrary enforcement.” He then asked for answers on whether Minnesota’s law would permit more than a half dozen different T-shirts.

Daniel Rogan, who argued in support of Minnesota’s law, said it wouldn’t allow the NRA shirt or Second Amendment shirt Alito asked about. The First Amendment shirt was fine, he said. And the rainbow flag shirt was OK unless there was an issue on the ballot that related to gay rights, Rogan said.

The case the Supreme Court was hearing dates back to 2010 and involves a dispute that began over tea party T-shirts and buttons with the words “Please I.D. Me,” a reference to legislation then under discussion in Minnesota that would have required voters to show photo identification. It was later defeated.

Pointing to the state’s statute, Minnesota officials said before the election that neither item would be permitted at the polls. In response, a group of voters and organizations sued. One of those voters, Andy Cilek, was in the courtroom Wednesday. Lower courts have sided with Minnesota.

The Supreme Court has previously upheld some restrictions at the polls on voters’ free speech rights. In 1992, the court upheld a Tennessee statute prohibiting the display or distribution of campaign materials within 100 feet of a polling place.

On Wednesday, J. David Breemer, the attorney arguing against Minnesota’s law, said the court’s previous decision to uphold restrictions dealt with active campaigning rather than the passive wearing of clothing. But Justice Gorsuch suggested that distinction was “slippery” and then launched into his own hypothetical.

“A T-shirt, you say, is passive. What if it were instead a sign on my head, you know, flashing lights? Is that active or is that passive?” he asked. “How are we supposed to police the line … you’re suggesting?”

A decision in the case, 16-1435 Minnesota Voters Alliance v. Mansky, is expected by the end of June.