In a landmark decision, a federal court ruled that Albuquerque’s civil forfeiture program “violates procedural due process” because it forced hundreds of property owners to prove their own innocence. With his ruling spanning over 100 pages, Judge James Browning also found that the city’s “forfeiture officials have an unconstitutional institutional incentive to prosecute forfeiture cases,” since the program has “de facto power over its spending…the more revenue it raises, the more revenue it can spend.”

Thanks to this incentive to police for profit, the city’s forfeiture program “generated $11.8 million in revenue in the form of forfeitures, settlements and fees,” between fiscal 2009 and 2016. The program was so lucrative, revenues actually exceeded expenses for four of those years.

“Today’s ruling is a total victory for fairness, due process and property owners everywhere,” said Robert Everett Johnson, an attorney at the Institute for Justice, which litigated the case. “Together, these rulings strike at the heart of the problem with civil forfeiture. We will undoubtedly use this decision to attack civil forfeiture programs nationwide.”

Judge Browning’s ruling is the latest flashpoint in the battle against civil forfeiture in New Mexico, which has been a surprising hotbed for reform. Back in 2014, the Institute for Justice and The New York Times exposed a vehicle forfeiture conference where New Mexico law enforcement officials made a series of startling statements, including calling civil forfeiture a “gold mine” that offered “little goodies.”

Spurred in part by those Kinsley gaffes, lawmakers unanimously approved legislation to abolish civil forfeiture throughout the state. When the law took effect in July 2015, New Mexico became the second state (following North Carolina) to only allow criminal forfeiture, which requires a criminal conviction to forfeit property. 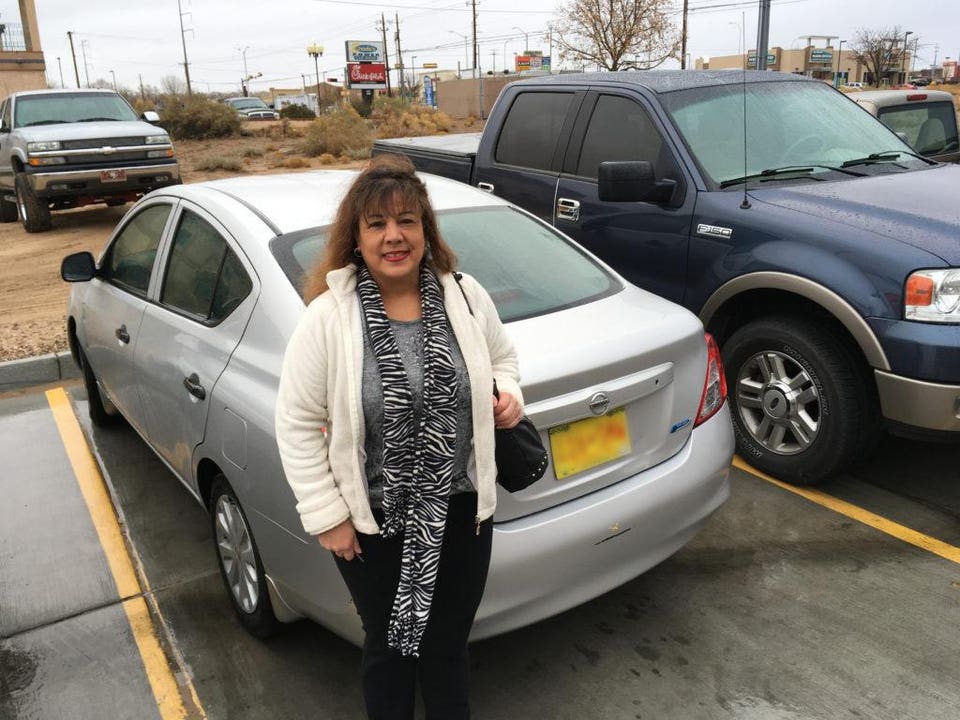 Yet Albuquerque refused to comply with the new state law, and continued to seize cars under its municipal forfeiture ordinance, a fact Arlene Harjo painfully learned first-hand. In April 2016, Arlene lent her Nissan Versa to her son, who said he wanted to use it to hit the gym. Instead, he hit the bottle and was arrested for a DWI. Even though Arlene wasn’t charged with a crime, wasn’t driving the car and had no idea her son intended to drink and drive, Albuquerque police seized Arlene’s car anyway.

Arlene now had to fight to save her car from civil forfeiture, almost a year after New Mexico had abolished the practice. Under the city’s ordinance, owners like Arlene had to pay $50 to request an administrative hearing within 10 days of seizure. If she failed to promptly pay, her car would have been declared abandoned and auctioned off. Even if an owner wins at the hearing, the administrative hearing officer can order the owner to pay “storage fees” before the car is returned. Storage fees accumulate at a rate of $10 per day—amounting to thousands of dollars over the course of a year.

Worst of all, Arlene was guilty until proven innocent. Unlike criminal cases, where defendants are presumed innocent and the government must bear the burden of proof, under Albuquerque’s civil forfeiture ordinance, Arlene had to prove her innocence. Nor was her situation particularly unique.

As the city’s chief hearing officer revealed in the infamous 2014 conference video, “about half of the vehicles that APD seizes are not owned by the offender that we confiscate it from.” Instead, the vehicle owners are “the mothers, the fathers, the wives, the girlfriends, the brothers, [and] the uncles” of the offenders.

Coincidentally, that same hearing officer also heard Arlene’s case. He rejected her claim as an innocent owner. Undaunted, Arlene joined with the Institute for Justice and sued the city in August 2016 to win back her car. Just a few months after she filed her lawsuit, Albuquerque returned her car, since it turned out the Nissan wasn’t even in the city’s jurisdiction when it was seized. Her challenge continued, culminating in her legal victory on Saturday.

In his ruling, Judge Browning declared that the city’s forfeiture program was unconstitutional for two main reasons. First, Judge Browning ruled that Albuquerque’s forfeiture program “violates due process by depriving car owners of their property unless they prove their innocence,” which creates an “unconstitutional risk of an erroneous deprivation.”

He cited the U.S. Supreme Court’s decision in Nelson v. Colorado, which invalidated a Colorado law that required criminal defendants whose convictions had been overturned to prove their innocence in order to recover court costs and fees. “Defendants should not be saddled with any proof burden,” Justice Ruth Bader Ginsburg wrote for the majority in Nelson, “they are entitled to be presumed innocent.”

Moreover, Browning rejected the city’s argument that its probable-cause hearings were sufficient to protect due process. “Proving that the City of Albuquerque has probable cause to seize a vehicle does not reveal anything about what the vehicle’s owner could or could not have reasonably foreseen,” he noted. Those hearings require the city “to prove nothing about the car owner.”

“This ruling confirms our concerns with the past approach and the need to protect the constitutional rights of people in our community,” Alicia Manzano, a spokeswoman for Mayor Tim Keller, told the Albuquerque Journal. Earlier this year, Keller announced that Albuquerque would only seize cars “in cases where there has been a conviction” and “requested city council to update the ordinance.” “The city’s legal team will analyze the impact the ruling will have,” Manzano added.

Should other courts adopt Browning’s reasoning, it could have a major impact. Today, only 16 states(including New Mexico) and Washington, DC put the burden of proof on the government for innocent-owner claims.

“I’m glad this is going to help people in the same situation,” Arlene said in a statement. “It’s totally wrong what the government is doing. Hopefully, now more people will fight back, and courts will say this has to stop.”

Second, Judge Browning ruled that the city has “an unconstitutional institutional incentive to prosecute forfeiture cases because, in practice, the forfeiture program sets its own budget and can spend, without meaningful oversight, all of the excess funds it raises from previous years.”

Tellingly, the program’s biggest expense was employee compensation. From fiscal 2009 to 2016, the city spent $3.7 million in forfeiture revenue on salaries and benefits for all the employees at its DWI Seizure Unit, as well as the two city attorneys who handle forfeiture cases.

As the U.S. Supreme Court ruled almost 40 years ago in Marshall v. Jerrico, “A scheme injecting a personal interest, financial or otherwise, into the enforcement process may bring irrelevant or impermissible factors into the prosecutorial decision, and, in some contexts, raise serious constitutional questions.”

Despite that denunciation, the High Court actually sided with the government revenuers in Marshall. In that case, the Supreme Court ruled that it was permissible for the Labor Department’s Employment Standards Administration to reimburse itself with the money collected from civil penalties it had imposed.

Nevertheless, Marshall helped protect Arlene’s due process rights. As Browning pointed out, “the undisputed facts of this case sharply contrast with those in Marshall.”

“In Marshall, the fees collected represented less than one percent of the program’s budget,” Browning wrote, but in Albuquerque “the forfeiture program revenues pay all of the program’s major expenses.” Moreover, “the forfeiture program officials are in de facto control of how its revenue is spent,” while in Marshall, “a detached centralized authority determined how to allocate the program’s budget and decided to allocate funds based on costs, as opposed to revenues raised.”

Directly quoting from the Marshall decision, Browning concluded that “there is a ‘realistic possibility’ that forfeiture officials’ judgment ‘will be distorted by the prospect of institutional gain.’” In order to “pass constitutional muster,” Judge Browning recommended that cities “place forfeiture revenue directly into its general fund and then appropriate money from that fund to pay for the forfeiture program’s expenses.”

This ruling could also jeopardize forfeiture ordinances in Santa Fe and Las Cruces, which, like Albuquerque, allow their seizure programs to self-finance with forfeiture revenue. Those municipal forfeiture programs also violated New Mexico’s sweeping reform: When the state voted to abolish civil forfeiture, it required all forfeiture proceeds to be deposited in the general fund.

Unfortunately, reforms like New Mexico’s are rare: The federal government and 43 states let police and prosecutors keep anywhere from 45 to 100 percent of the proceeds of forfeited property. Harjo v. Albuquerque could set an important precedent to strike down forfeiture rackets in those states.

“For decades, civil forfeiture has lured officials away from impartial enforcement of the law and toward policing for profit,” said Robert Frommer, a senior attorney at the Institute for Justice. “Today’s ruling striking down Albuquerque’s forfeiture program is a major step towards ending forfeiture not only across New Mexico, but throughout the United States.”

I am a writer and legislative analyst at the Institute for Justice (IJ), a public interest law firm. As a member of IJ’s Communications team, I regularly write opeds and blog about economic liberty, private property rights, the First Amendment and judicial engagement. On the…