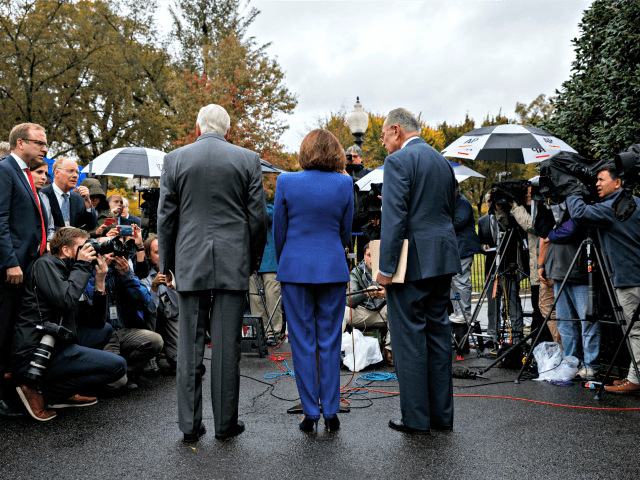 Congressional Democrats walked out of a White House meeting on Syria with President Trump on Wednesday.

Pelosi’s behavior was “unbecoming” according to Rep. McCarthy and the President responded to her by hammering the House Speaker, calling her a “third grade politician.”

Initial reports claimed Trump called Pelosi a “third rate politician,” however it was later corrected to accurately report that he called her a ‘third grade politician.”

Prior to the meeting, the House passed a resolution opposing President Trump’s decision to pull US troops out of Northern Syria.

House Speaker Nancy Pelosi (D-CA) threw a tantrum and stormed out of the meeting, according to House Minority Leader Kevin McCarthy (R-CA).

Pelosi told reporters outside of the White House that Trump was “shaken up” and refused to cooperate.

“That’s why we couldn’t continue in the meeting because he was just not relating to the reality of it,” Pelosi told reporters outside of the White House.

Pelosi on Trump and the resolution condemning Trump's decision: "The size of the vote, more than 2 to 1 of the Republicans voted to oppose what the president did, probably got to the president because he was shaken up by it … What we witnessed … was a meltdown."
Via CBS pic.twitter.com/maDQkkZX4b

McCarthy on WH mtg on Syria: There is a pattern of behavior with Speaker Pelosi..she stormed out of another meeting..we had a very productive mtg

“Her whole focus has to be on impeachment,” McCarthy said.

McCarthy: The Speaker tries to make everything political..she
stormed out of the meeting..her whole focus has to be on impeachment

McCarthy said when Pelosi left the meeting, it was “calmer and more productive.”

"I've been in a lot of meetings where individuals get heated with one another. I do not believe in that process, that you get up and you walk away" https://t.co/fSVgAefSWz pic.twitter.com/XxNJB75gYj

A White House meeting between President Donald Trump and members of Congress blew up after the foreign policy establishment tried to convince him to keep American soldiers in Syria and act to defend the Kurds.

Members of Congress were deeply disturbed by Trump’s remarks on Wednesday, as he spent the majority of the day defending his decision not to engage militarily in Syria against the Turkish attack on the Kurds.

The House sent a strong rebuke to the president, voting 354-60 on a resolution opposing Trump’s foreign policy decisions in Syria.

But the meeting did not last long.

“He was insulting, particularly to the Speaker, she kept her cool completely but he called her a third-rate politician,” Schumer said to reporters at the White House after they walked out the meeting. “This was not a dialogue, it was sort of a nasty diatribe not focused on the facts.”

Pelosi said that Trump had a “meltdown,” repeating previous accusations after meeting with the president.

“What we witnessed on the part of the president was a meltdown, sad to say,” she said.

She also detailed her response to Trump

“I said, ‘I wish you were a politician Mr. President, then you would know the art of the possible,’” she said.

According to Schumer and Pelosi, Trump also told Democrats that some of the members of ISIS were “communists” which “that might make you happy.”

Schumer said that McConnell told Trump that his decision in Syria was “wrong” and challenged the Senate Majority Leader to bring up the House-passed resolution in the Senate.

“While Democratic leadership chose to storm out and get in front of the cameras to whine, everyone else in the meeting chose to stay in the room and work on behalf of this country,” she said in a statement, defending Trump as “measured, factual and decisive” in the meeting.

Grisham called Pelosi’s decision to walk out of the meeting “baffling, but not surprising.”

“She had no intention of listening or contributing to an important meeting on national security issues,” she said.

Trump shared photos of Speaker Pelosi on Twitter, accusing her of having a meltdown.

Apparently once Nancy Pelosi finished her political meltdown and stomped out of the briefing, the remaining democrats and republicans engaged in a healthy discussion with U.S. military leadership and President Trump about the purpose of the U.S. draw-down.

END_OF_DOCUMENT_TOKEN_TO_BE_REPLACED

“Nation Building” is a very lucrative enterprise in/around Washington DC.   Here’s what happens when that business opportunity is removed from the UniParty financial portfolio:

END_OF_DOCUMENT_TOKEN_TO_BE_REPLACED

The level of political nonsense today from the House of Representatives is off-the-charts.  Speaker Pelosi calls a resolution to the House floor to denounce President Trump for removing 28 troops from a foreign war never authorized by the same House.

If Pelosi wants to have a war with Syria, then declare one.  Or, Pelosi could call a resolution to the House floor to condemn Turkish President Erdogan for invading Syria. Instead, the House votes to denounce President Trump for getting our military out of the way.   The Democrats are the party of war, and a whole bunch of republicans are supporting them.  Why?  Simply, because war is a big business from K-Street.

Nancy Pelosi, Chuck Schumer and Steny Hoyer walk out of a meeting with President Trump because, according to them, the president called the speaker a “third-rate politician”. Speaker Pelosi replied “I wish you were a politician”…. How typical is that?

END_OF_DOCUMENT_TOKEN_TO_BE_REPLACED

President Trump prefers to use targeted economic weapons instead of the U.S. military forces against foreign adversaries.  This is especially true if foreign actions are taking place amid the complex circle of geopolitical interests, against the interests of allies.

The warning is clear.  President Trump is clear-eyed about the motives and intentions of the Turkish president, and Ergodan’s ideological alignment with political Islam, via The Muslim Brotherhood.

One of the reasons this strategy is better than any military action is simply because Turkey is a unique NATO ally, and the NATO alliance within Europe is insufferably incapable and unwilling to take action to defend their interests.